Google swiffy can’t save Xcelsius… Yet

Last week Google introduced a new inovation from its labs factory called swiffy. Swiffy is a web based utility that can convert some flash .swf files into html5. Marcel Gordon, swiffy product manager, says about swiffy in this blog post “Swiffy uses a compact JSON representation of the animation, which is rendered using SVG and a bit of HTML5 and CSS3”. This is an exciting development for web developers at large, and Xcelsius dashboard designers in particular. Can you run your Xcelsius generated dashboard swf through swiffy and get a working html5 solution that will render on iOS? Well, unfortunately, not yet.. There are a few limitations that make swiffy not work with Xcelsius current version. First, swiffy currently only support swf files up to 512KB. An average Xcelsius dashboard is at least 1MB in size (in fact an empty 600*800 Xcelsius generated swf file would be close to 400KB, that is before you add a single value in the excel model or a single component to the canvas..).

Also, swiffy currently only support Action Script 2.0. The latest version of Xcelsius uses Action Script 3.0. I also got a couple of other errors when trying to convert my Xcelsius generated file using swiffy. There is no support for 9-slice scaling and embedded binary data. 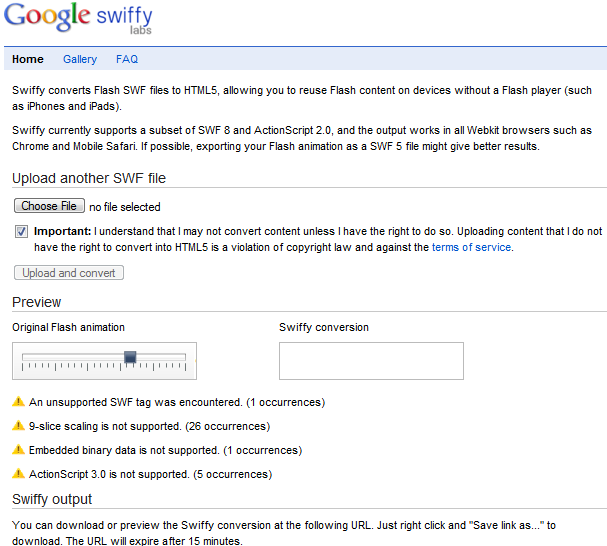 So, swiffy will not be able to save your next Xcelsius dashboard project when your users will ask about iOS support, but be sure to keep an eye on it, it might save the one after that..

This entry was posted in Xcelsius and tagged google swiffy, xcelcius for iphone, xcelsius for ipad, xcelsius html5, xcelsius ios. Bookmark the permalink.

2 Responses to Google swiffy can’t save Xcelsius… Yet