One of the features that webi was lacking for years was the ability to conditionally suppress columns. Especially when compared to Crystal that supported this kind of functionality from the get go, or Xcelsius with its dynamic visibility, webi report designers needing to show or hide columns in tables based on certain conditions were left to use cheesy tricks like setting the column width to 4px (historically, the minimum column width in webi) with white font and white background alert rules. This technique worked “O K” online, but exporting reports to excel revealed the “hidden” data columns and the extra padding could cause some formatting issues.
Well, webi in BO 4.0 has made a big step forward to resolve this issue. Now, any report element can be conditionally set to hide based on a formula, allowing report developers to create different tables for different scenarios.

Consider this simple example, using the e-Fashion universe:
Your reporting requirement is to present e-Fashion stores revenues by State and City, prompting users for a reporting Year. Moreover, in 2004, there were less stores and management wants to break down sales by stores, but only in 2004.
You can start by setting up your query with the needed objects: State, City, Store Name, Sales Revenue and Year. You can make Year a prompt.
Now, you can create two blocks in webi: one with the store name, and one without.

Next, use good old relative positioning to align them along the top right corner of each other. 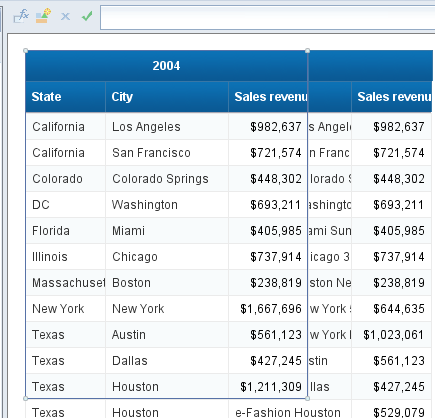 Finally, go to each report block format options, and specify the appropriate formula to determine when to display or hide it. 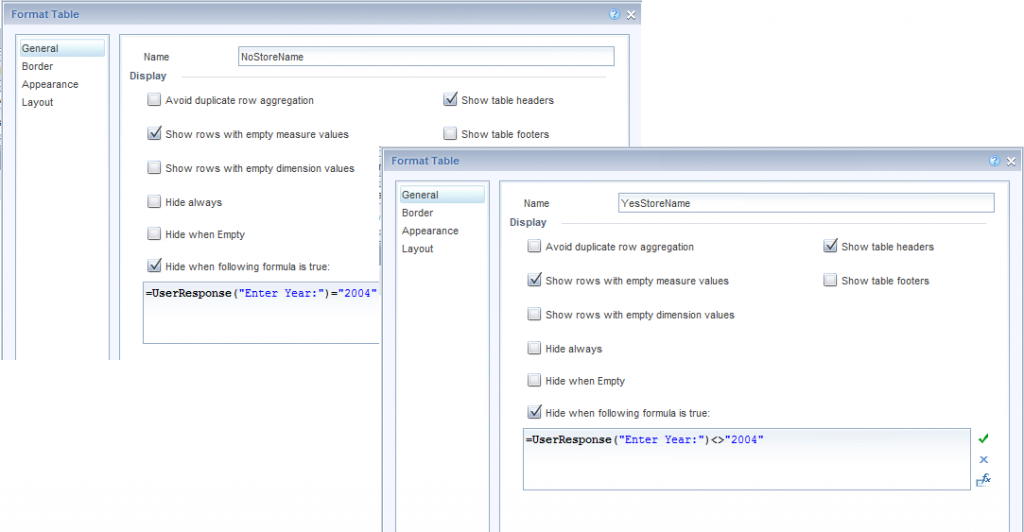 And Voila! When users select 2004 as the prompt value, they will get the store names column, for other years it will disappear.

16 Responses to Dynamic visibility in webi